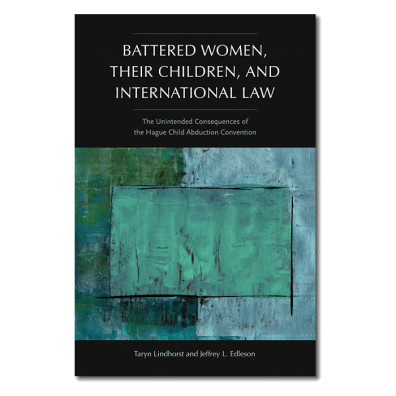 The 1980 Hague Convention on the Civil Aspects of International Child Abduction ruled that any child taken from one parent by another across international borders must be returned to their home country for custody to be properly and legally determined. While this saves parents who are victims of child abduction, it doesn’t account for those, especially women, who felt the need to emigrate to free themselves from domestic abuse and save their children from suffering. Because of the 1980 ruling, children taken by their mothers from abusive homes still have to follow the guidelines established at the Hague Convention.

Taryn Lindhorst, who graduated from WSU in 1984 and now works as an associate professor in the School of Social Work at the University of Washington, and Jeffrey L. Edleson, Dean of the School of Social Welfare at the University of California, Berkeley, have written a book that offers an alternative examination of the ruling. Battered Women, Their Children, and International Law looks into the other side of the Hague Convention ruling, examining instead the taking parent, that is, a mother taking her children out of an abusive home. Their book is a collection of interviews with these battered women and their attorneys, as well as analyzing cases where the Hague Convention is called into question.

The book brings to light the negative consequences of the Hague Convention, exposing a new side that wasn’t considered in the original ruling. It also goes into detail explaining the effect of domestic abuse on children and their mothers, the response to the Hague Convention in the context of domestic violence, and how “abduction” shouldn’t be used as an umbrella term because it doesn’t take into account all the different reasons why a child was taken away by one of their parents. This book is informative and exposes the flaws in making blanket statements and rulings without considering all of the justifications for such actions.