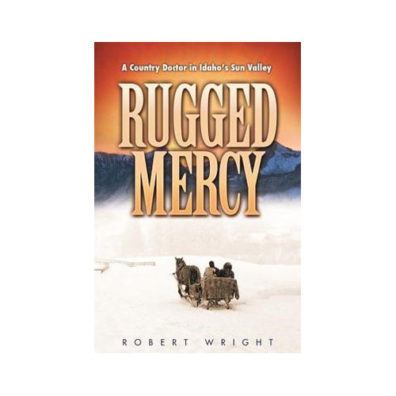 When 13-year-old Robert Henry Wright was caught spying on a kitchen table appendectomy, he was pulled in to assist. Inspired by that experience, the Hailey, Idaho, boy spent his early 20s in medical school, at first struggling to memorize the complex anatomy of the human body. After graduating, he married his childhood sweetheart, moved home to Idaho, and became a successful doctor, beloved in his community.

It was a rough start, though. His first patient, a woman having a difficult labor, died under his care. After that first fatal experience, Wright vowed to never lose a patient again and went to extremes, even risking his own neck in dangerous weather, to be where he was needed.

Rugged Mercy, written by the doctor’s namesake and grandson, examines the life of a man of medicine in the early 1900s in the rugged, rural area that is now Sun Valley.

The book is half memoir and half biography. Much of the text is a third-person narrative that walks the reader through the challenges of the elder Wright’s work. The author uses family stories and interviews with his grandmother, parents, and community members.

The rest is written from the author’s own point of view, growing up in the apartment above his grandfather’s office. Here we see the doctor’s work from a perspective of worshipful adoration.

This book honors the author’s grandfather, describes the sometimes difficult life of a doctor in the western frontier, and offers views into the early days of Idaho’s Sun Valley, capturing much of its history and character.