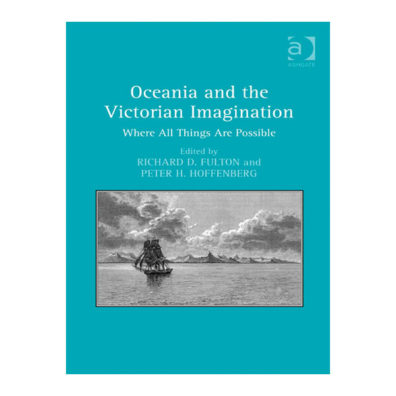 Devotees of Victorian-era writers like Robert Louis Stevenson, Jules Verne, H.G. Wells, and Joseph Conrad may well recognize the current of interest in Oceania, or the South Pacific, that runs through their stories.

During that period, from the 1830s to 1901, tales, photographs, travel books, and essays all fed and informed the imaginations of the Victorian people, shaped their views of “Oceania,” and affected their home cultures. Given its small role in the imperial scheme, “the South Seas loomed unusually large in the metropolitan Victorian imagination,” write the editors of Oceania and the Victorian Imagination, Richard Fulton and Peter Hoffenberg. Victorians from all classes were fascinated by the exotic elements of the South Pacific, as well as the possibilities of finding or creating a fortune and of reinventing oneself in a new environment. The editors write of Samoa, Hawai’i, and Australasia “…those exotic and distant lands and people were central to Victorian identification.”

Historians and literature professors from around the world contributed essays to this tidy book, among them Ingrid Ranum ’04 PhD, an associate professor at Gonzaga University, who explores domesticity and masculine identity in her essay, “At Home in the Empire.” She focusses on Joseph Conrad’s first novel Almayer’s Folly, the story of a Dutch trader in Borneo. She also looks at Robert Louis Stevenson’s short story “The Beach of Falesá,” a tale of a British man on a South Sea island. Both pieces were written in the 1890s. Ranum notes that both men moved to the “edge of the Empire” and took wives who were native to their new countries. She compares the two characters, one who can’t give up the Empire’s values for reality and the other who does.

Fulton’s own essay focuses on the South Seas in mid-Victorian children’s imaginations. While it did exist, Oceania was pretty much unknown to Victorian children save for stories in children’s magazines and the tales of returned missionaries. For them it was place of innocence, of adventure, of excitement and danger.

While this book is of interest to admirers of the Victorian period, particularly of literature, this book will be most useful to scholars and historians seeking to understand the Victorians.