A stroll through the grand ballroom at Bellevue’s Hyatt hotel one weeknight last spring took visitors into something that was part business networking event, part WSU Cougar reunion. The occasion, a CougsFirst! trade show, offered a chance to see and sample from an assortment of about 40 WSU alumni-owned businesses.

It was also as a time to catch up with old friends. Gary Wood ’79, sat at a table lined with beers and flyers for his business Great Artisan Beverage Company, a craft and specialty beer wholesaler. As Wood set up his samples, he explained that after school and a few jobs, he found his calling one day when he “followed a beer truck into a warehouse,” he said. “It was a Cougar dream come true.”

Bruce Titus ’79, a WSU classmate and owner of Bruce Titus Automotive Group, wandered over to say hello. “There’s a whole bunch of us here who went to school together,” he said, pointing out several other classmates in the room.

Registration for the 40 booths filled up quickly, among them Cougar quarterback Drew Bledsoe’s Doubleback Winery, the Visit Seattle marketing organization, and the Great Alaska Adventure Lodge.

It was a mix of new startups and established landmarks. One aisle featured DJ Darin Hanson ’01 at one end and BJ Duft’s ’86 Herban Feast Catering at the other. The catering booth offered small cracker cones filled with a tangy mousse made of Cougar Gold cheese. There were also tech firms and the Tacoma Rainiers, a shipping business, and a Coug-owned law firm specializing in defending DUI cases.

More than 500 people attended, and Brian Quint ’77, the owner of Aqua Quip, a Renton-based business selling swimming pools, hot tubs, and barbeques, was thrilled. “It’s so great to be able to come to this event and meet other Cougs,” he says. Being a business in western Washington, and having gone to Washington State University, “there’s a special connection, even if you were there 10 years before I was or 20 years after.” 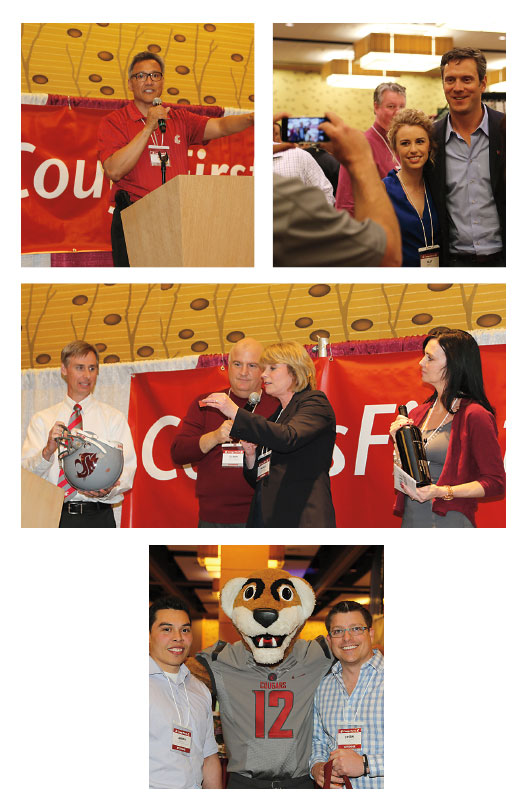