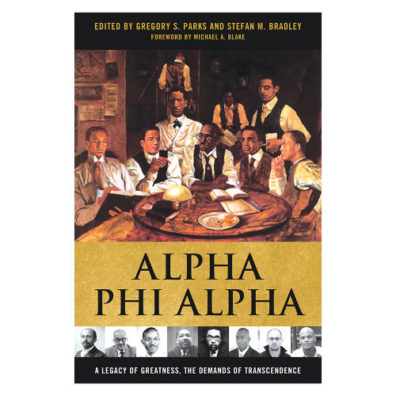 Alpha Phi Alpha is the only black fraternity to be founded at an Ivy League school. Starting at Cornell in 1906, its founders were just a generation away from slavery and intent on creating an organization to foster academic scholarship, build lifelong friendships, and promote social progress. The organization soon opened chapters at Harvard, Howard, and Virginia Union University, eventually becoming one of the largest black Greek-letter fraternities in the country with more than 700 active chapters, including one at WSU.

Bradley is an associate professor of history and African American studies at Saint Louis University and author of Harlem vs. Columbia University: Black Student Power in the late 1960s. He and Parks, who teaches law at Wake Forest University, have pulled together a team of scholars to consider the fraternity from its historical achievements to its current practices. Both editors are members of the organization. They write that “In the end, our goal is to make the House of Alpha the best it can be and for it to live up to the high ideals present at its founding.”

It was time, they write, to take a critical look at Alpha Phi Alpha with suggestions on how the brotherhood could continue its ideals and update its practices to both protect the image and brand and promote serious civic action. Among the weaknesses, they find that Alpha seems to lack a current public policy agenda or strong effort for social justice issues, instead relying on its history and identifying with the well-known efforts of its past members like Marshall and King.

The scholars look at Alpha Phi Alpha through the lenses of history, law, sociology, and African American studies. While the essays in this book are focused on the fraternity, the lessons can easily apply to other Greek-letter organizations. In their conclusion, the editors note that college fraternities and civil rights organizations throughout the country have lost their cachet and membership in recent years, and if Alpha is going to live up to its ideals, “significant work remains to be done.”