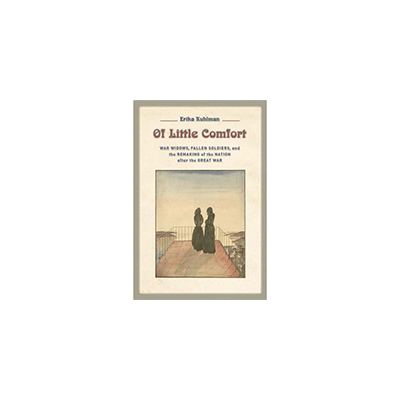 In World War I, or the Great War, more than nine million combatants died, leaving behind approximately a million and a half widows. The war widows not only mourned their losses, they also faced quandaries about their new post-war roles in Germany, the United States, and other countries embroiled in the conflict. Would they perform as models of national self-sacrifice and patriotism? How should they support families, by work or by welfare? How should they even mourn and bury their lost spouses?

The traditional roles of widows in those societies faced a massive shift as the definitions and structure of marriage and gender were transforming. Even the mourning of widows and other survivors was disrupted by a lack of knowledge of when their loved ones died and where their bodies were. The war exacerbated the questions around the roles of these widows, and in Germany and the United States, the governments attempted to use the “army of widows” to emphasize the loss and build a sense of national pride.

As historian Erika Kuhlman ’95 writes, the widows didn’t always cooperate with the national goals. In Berlin, more than 10,000 widows marched in protest in 1918 demanding compensation for their losses. Many widows publicly and privately criticized their governments’ response to the death of soldiers. Economic hardship contrasted with ideas of who widows should be in the aftermath of the Great War—remarried and having babies, symbols of wartime bravery, or “new women” engaged in rebuilding the nations.

Kuhlman uses letters, diaries, popular magazine articles, and correspondence between widows and their governments in the United States and Germany to examine the ways war widows coped with their roles after World War I. She writes about the war widows of France and England, and then looks at the transnational aspects of widowhood, where women who lost their soldier-husbands compared experiences and sometimes engaged in cross-border activities like providing aid to former combatants.

The book takes a deep look at the opinions of widows themselves, through their own words, and puts those experiences and struggles into the context of national efforts to define the war for both vanquished and victorious countries, such as using ceremonial mourning for soldiers and the plight of war widows to reinforce their national identity.