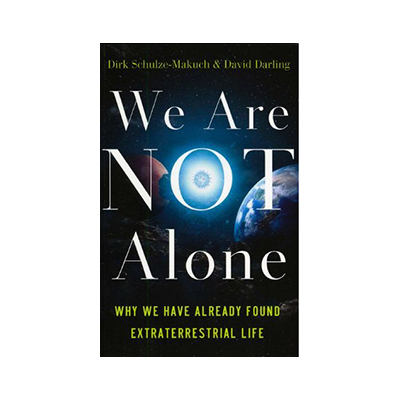 From Percival Lowell’s maps of Mars to 1938’s ill-fated “War of the Worlds” broadcast, claims of life in outer space have been tinged with whimsy and sensationalism. But in recent decades, more rigorous thinking and evidence-based science have been able to elbow their way into the discussion. As WSU astrobiologist Dirk Schulze-Makuch and author David Darling note, we now “have real data to work with.”

Using the findings of numerous space missions, as well as compelling analogues of odd life forms here on Earth, the two make a convincing case that life exists off our planet and even on the planets next door. They point to Mars’ earlier years as a more hospitable place, with abundant water, above-freezing temperatures, and energy from volcanic activity. Even now, the circumstances could be right for some form of extreme-loving bacteria to be on or near the Martian surface. (See “Questioning the Questions” in the Summer 2007 issue.)

They also describe how alien microbes could account for the odd spectra and particles detected in the lower clouds of Venus, which, billions of years back in the day, may have been even more livable than Earth. They like Europa, too, noting how the Jovian moon has deep, nutrient-rich oceans beneath its crust.

But as the authors note, “alien forensics is a tricky business.” Its extraordinary claims require, as Carl Sagan said, extraordinary evidence. It can be hard to know just what you’re looking for. The tools and laboratory conditions a billion miles away can be pretty trying.

That scientists can do this work at all is amazing. Schulze-Makuch and Darling describe their efforts in a readable, often anecdotal prose that evoke a sense of wonder at both the science done here on Earth and the life forms that might exist elsewhere.