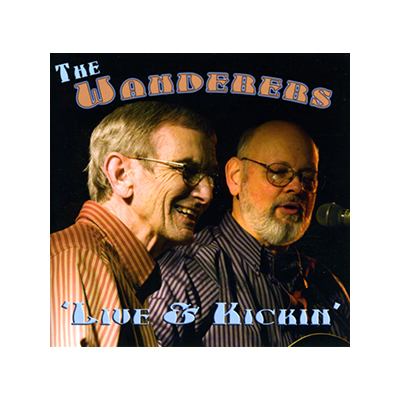 Bill Murlin ‘63 and Carl Allen ’60 created The Wanderers soon after they met in September, 1959, on the cusp of the Great Folk Scare of the 1960s. With Al Hansen on bass, the singer-guitarists performed regularly around Pullman for three years. Murlin and Allen continued after graduation with warm, unadorned harmonies and an unflinching folk repertoire of tunes by the Kingston Trio, Bill Staines, Pete Seeger, and their patron icon, Woody Guthrie.

As an unemployed and largely unknown Oklahoma folk singer in May of 1941, Guthrie got a one-month assignment to write songs promoting the Bonneville Power Administration’s hydroelectric dams on the Columbia River. He wrote 26 songs, earning about $10 each. Among them: “Roll on Columbia,” the state folk song.

The Wanderers and Guthrie merged in the 1980s, when Murlin, himself a BPA employee, collected and edited Guthrie’s Northwest work for Bonneville’s 50th anniversary.  Allen developed a first-person characterization of Guthrie singing the Columbia River Songs. Together, Murlin and Allen opened a Smithsonian exhibit of Guthrie memorabilia and performed at Guthrie festivals in Oklahoma and Texas.

The Guthrie spirit runs through “Live & Kickin’,” the Wanderers latest CD. Released last year for their 50th anniversary, and neatly coinciding with their Golden Grads weekend, the CD features four Guthrie tunes, a fifth song with Guthrie lyrics, Dean Cook’s “I Think That I Saw Woody,” and an overall spirit that embraces the plain-spoken, unvarnished pleasure of American folk.

Their music is beguilingly simple—songs about trains, rain, rivers. It’s hard to listen to or reflect on the dropped g in its title and not think of Christopher Guest’s mockumentary, “A Mighty Wind.” Then again, a song like “Deportees,” Guthrie’s lament for nameless migrant farm workers killed in a plane crash in California’s Los Gatos Canyon, remains fresh and topical after more than half a century. With advocates like Murlin and Allen, it’s easy to appreciate how enduring such music can be when it focuses on being sincere and heartfelt.

“Live & Kickin’” is available for sampling and sale through  CD Baby, http://www.cdbaby.com/cd/wanderers2.