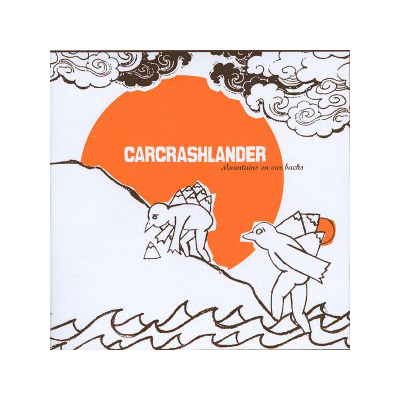 Nestled in the generally indescribable genre of indie music, Carcrashlander challenges the listener by continuing to venture into experimental music. In their most recent album, Mountains On Our Backs, the group combines basal vocals and keyboards with wildly discordant guitar riffs and deep percussion.

The band began as a project by vocalist Cory Gray. With the addition of drummer Brian Wright, guitarist Alexis Gideon, bass guitarist Cliff Hayes, and flutist Jessica Wright, who doubles as band manager, a sound was born. The group has released four albums including Mountains On Our Backs. Influenced by the former Desert City Soundtrack and current indie music group The Decemberists, as well as vocal legends like Bob Dylan and John Lennon, Carcrashlander’s sound has its own niche.

Although they now live in Portland, Oregon, two members attended Washington State University. Jessica (Mardis) Wright ’02 and Brian Wright ’02 played in the WSU Jazz Band as music students. Jessica specialized in the tenor and baritone saxophones for the band, as well as studied jazz flute. Brian focused primarily on the drums. Both were twice honored as Outstanding College Soloists at the Lionel Hampton Jazz Festival.

Following graduation, Jessica and Brian moved to Los Angeles where Brian completed his MFA in jazz drums at the California Institute of the Arts. They were married in 2003 and relocated to Portland where Jessica is now in her final semester at the University of Portland finishing her MA in music with an emphasis in composition. Brian has recorded more than thirty records and soundtracks, including three with Carcrashlander.

In Mountains On Our Backs echoing voices and eerie guitars dominate the eight-minute title track. The discordant guitars and deep, harmonized vocals might convince a new listener to skip the track, impatient to hear a cleaner recording. With subsequent tracks, Carcrashlander shifts from a chaotic adventure to a thoughtful, haunting sound. Deep lyrics and rich piano chords blend together to form an intriguing album. Brian’s drums are especially noticeable, and appreciated, in “Capillary Webs” and “Bone Noose” where the percussion ties all the other musical elements together, while itself resisting the limelight.

Mountains On Our Backs balances upbeat, overexcited tracks with quiet, thoughtful moments of musical poetry. While Cory performs as the lead vocalist, the emphasis on percussion and seemingly personalized guitar riffs balance the album between each member to create a cohesive record.

Carcrashlander performs “Driveway” from Mountains on Our Backs at The Knockout, San Francisco, March 2008