I don’t know about you, but I’ve been waiting for this all my life. Growing up with parents born in the crash year of ’29, and with grandparents marked and ennobled by sacrifice and ingenuity in living well with nothing, I’ve amounted to nothing but a Baby Boomer: first coddled and spoiled, and soon to bring down, single-handedly, the world’s climate stability and Social Security.

But now I have a chance to redeem myself. Pretty soon I’m gonna experience some real honest-to-goodness privation, my own little corner of a general decline in living standards in the U.S. of A.

I’m psyched. A Depression of my own! 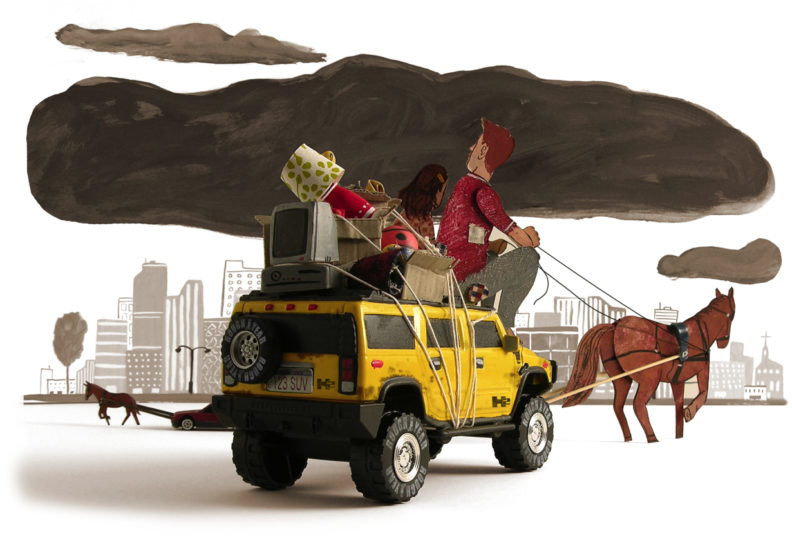 I’m not talking about those piddly little personal glooms that have made Pfizer and Lilly a few quadrillion dollars in the last 20 years. No, sir. I’m talking about the kind of depression that swallows quadrillions of dollars like they were swallows, in a black hole of economic collapse from which no light and no equity (if you got any) emerge.

We won’t need Prozac and Zoloft because, friends, with something actually, really, objectively bad on the horizon, we’re immunized against such boomer whining. There’s no depression in the Depression! As the uncanny sage Walker Percy (born 1920, a teenager in the Depression) put it, “People feel good when bad things happen.”

Amen, brother Percy. I’m already feeling friskier myself just thinking about the catastrophes, the breadlines, the rusting Jags in front of the mansions from LA to the Florida intercoastal.

The nation needs 70 billion dollars in foreign investment every month just to service our debts. The Chinese provide much of this, and though they don’t want to let us down, the dollar’s looking a little low-rent. They’re thinking, we’d like to diversify into something more solid, like the Euro, or maybe the zloty.

The sub-prime meltdown is affecting markets worldwide. Investments tied to billions in adjustable-rate mortgages due to reset this year—these are as stable as a unicycle on the beach. An epidemic of foreclosures follows for people who were persuaded to buy too much house with too little means.

And with oil production peaking around the world, an increasing demand will coincide with a falling supply. This means, quite simply, no more mangoes in January. Or July, for that matter. Yes, the Edvard Munch mask on your face is extremely life-like, and understandable.

But you’ll have to get over it, and plumb the charms of root vegetables. Shortages, disruptions in the economy, desperate grasping for what’s left. Resource wars replacing football as the number one American spectator sport. Oh, the late-harvest schadenfreude will be flowing! Except it’s not someone else’s troubles we’re toasting. Drink, for tomorrow we…?

With such signs of a major crisis glowing in neon, I’m purring. Spoiled no more, spoiled no more, great-grandpa in heaven I’m spoiled no more. Sacrifices and suffering are on the way. Here’s how to deal, and emerge with a bona-fide bad-times street cred.

Turn every square inch of your yard into a garden, your 50-by-130-foot lot into a .15 acre farm. Tear out the azaleas and plant spuds. Out with the lovely and parasitic roses. In with the broccoli and the cukes. Climate change now welcomes peach trees to once forbidding zones. Can bananas be far behind? Take a canning class. Keep rabbits. Get a goat.

Bake bread with natural yeasts culled from thin air. Forage for edible grasses. Once you cursed dandelions and tried to kill them. Soon you’ll worship their Vitamin A and potassium (while you wait on the bananas’ march north).

Sell the car and ride your bike to work. Forty-mile commute? Start early. You won’t have the job for long anyway.

Stock up on nonperishable food items. Shop for sales. Remember, Depression prices aren’t necessarily bargains when you have no money. My local grocery store is discontinuing a certain brand of canned sardines. They’re going for 47 cents apiece. I’ve squirreled away 92 cans so far. At these prices I suspect I’m buying a compact mercury delivery system, but they’re a great source of protein and calcium, and they’re just yummy on saltines with a beer. Yes, beer. I’ll accept most privations, but at this point I still plan on smiling once in awhile.

Oh, these are dire, desperate, utterly inspiring days ahead. Our deliverance, clearly, from lifelong condemnation by hardier folk as overfed, unappreciative, materialistic, utterly self-centered, narcissistic, and vain. We’ll show the Greatest Generation just how … not so execrable we really are. The housing market is sapped and sloughing. Consumer spending is 70 percent of GDP. Low-interest rates gave us cash in our pockets, when our buying power really hasn’t been the same since 1973. We used the cash to buy plasma TVs and trips to Provence, and we kept the economy from collapsing years ago…. The last, cleverly lighted scrim is being peeled away to reveal…. Whoa, wait a minute. That means—is it possible—that actually, things haven’t been as rosy as we thought? Are roasted quail really not going to continue flying into our mouths? Have we been dazzled by mirrors? Are these silly questions? No wonder we’re mired, on average, in $10,000 of credit-card debt. The hardy folk bought houses for $10,000 and sold them for 50 times that. That’s history. They retired on pensions, in Phoenix condos and RVs.

We’re keeping our fingers crossed for reverse mortgages and a Social Security benefit we may trample out of existence with our sheer size.

Forget what I said. The Depression of ’08 isn’t a cleansing penance. It’s just a surprise, but logically crafted, denouement to an intricate bit of theater begun in the ’50s with tail fins and Levittowns, and duck and cover, and ending now, soon, with dandelion greens and canned sardines. Move over, Tony Kushner. Two nights in the theater? We’ve been glued to our seats for 50 years. Will the last one to leave turn out the lights?

Seriously, turn out the lights. You think this is 1962? And then replace them with compact fluorescents. Waste not, want not, save that string, clean your plate, and compost, compost, compost. And, can I get a beer, please?

Full disclosure: the author’s tone suggests facetiousness. This is to avoid the appearance of being out of his mind. He’s actually doing and/or done nearly everything described above. Still buys his yeast in bulk and has no lawn left to cultivate dandelions. But the tomatoes and the beets were irrepressible last summer. The bike has 50,000 miles on it. And Walt, upstairs, is quiet, cleans up the kitchen, and pays on time.