For a Parkinson’s patient, every day is different. One day the symptoms could include tremors and muscle stiffness. Another might bring difficulty eating and swallowing. But every day, Parkinson’s is a progressive, chronic, debilitating disease that can require special and specific accommodations.

Over 10 years, Wendy Holman’s mother lived in 10 different facilities. Each time her needs changed, she had to find a new home to accommodate her new condition. Dick Almy’s father has a very different story. He lost some cognitive abilities and ended up in a locked ward with Alzheimer’s patients. But his dementia was very different from theirs, said Almy. And because of his Parkinson’s-related physical impairments, the ward was a difficult and sometimes dangerous place to be.

Holman, president of Puget Sound Housing for Parkinson’s Disease (PuSH for PD), traveled to Spokane this winter with Almy, the vice president, to look in on a large-scale project with Washington State University nursing and design students. The interdisciplinary project led by landscape architecture professor Bob Scarfo stems from an interest in the interaction between health and the built environment. To better understand the disease and the needs of their clients, Scarfo urged his students to visit Parkinson’s patients to see firsthand the challenges they face.

“When I went into people’s homes they said, ‘We need this, we need that,'” said graduate student Amber Joplin in her presentation. “Each one presented me with totally different symptoms, relationships, and needs.”

Often Parkinson’s patients end up in nursing homes too early. The institutional character of many of the residences can affect the mental well-being of the patients and perhaps cause them to deteriorate faster, noted design students Ali Ilhan and Isel Oygur, who are working on their doctoral degrees in design.

While considering the changing needs of patients and valuing the feeling of home over institution, Scarfo’s design students presented a variety of plans that included space for families, wide pathways and raised gardens for outdoor recreation, and a strong feeling of home.

The efforts of the WSU nursing and design students, as well as financial research from Eastern Washington University business students, have been invaluable for PuSH for PD, which is now working on a residential care project to be built north of Seattle, says Holman. “To our knowledge there never has been a facility built ground-up with a focus on people with Parkinson’s disease,” says Holman. PuSH for PD is hoping to see the Seattle-area project completed in two to three years. It will house 24 patients and serve as a national model for other Parkinson’s residence projects. 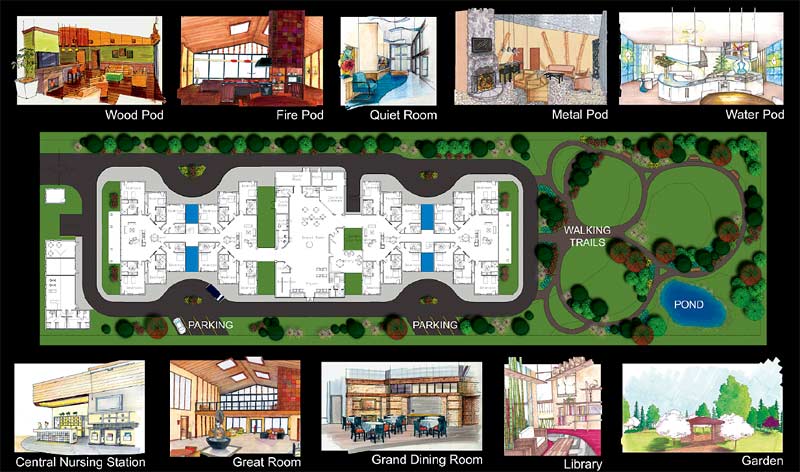