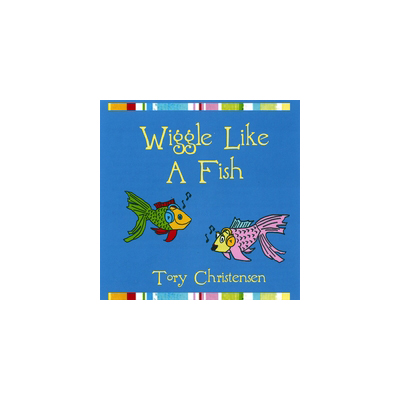 Sometime in the 1970s or ’80s, when National Public Radio was airing a program called Folk Festival USA, I recorded a concert from one of those broadcasts by a singer named Sam Hinton. Among the songs Hinton performed was one called “Barney McCabe.” It was about “a wise child” who went off in search of an evil witch and ultimately destroyed her with the help of three canny dogs—Barney McCabe, Doodleydoo, and Soo Boy. He also sang a song in Yiddish called “Bulbes” (BULL-base) about the dreariness of having nothing but potatoes to eat day after day. My kids were pretty young at the time—we all were!—and we listened repeatedly to that concert, until “Bulbes” and “Barney McCabe” became ingrained in our family mythology.

I can imagine something of the sort happening in families who listen to Wiggle Like a Fish, a CD for children by Tory Christensen ’01. A high school counselor by profession and a composer, lyricist, and performer by avocation, Christensen acknowledges in the CD liner notes the influence of his father, who sang songs to the child Tory “over 30 years ago . . . and played the very guitar that was used on this CD. His music always made me smile.” “There are few things greater in this world,” Christensen continues, “than the feeling you get while smiling with a child. I hope these songs will bring as many smiles to you and your family as they have to me and mine.”

It’s immediately apparent, as you listen to the 11 songs on Wiggle Like a Fish—all written by the performer—that Christensen’s mission is to exert as positive an influence on children as his father exerted on him. Song after song promotes values of self-esteem, good judgment, thoughtfulness, cooperation, courtesy, kindness, imagination, and love.

In “It’s All Up to You,” for example, Christensen addresses the question every child is asked: “What do you want to be when you grow up?” His answer? “Me, I’m a singer. / What are you? / You could be a bell ringer / If you wanted to. / It really doesn’t matter / What you choose. / Just do what you like / And like what you do. / It’s all up to you.” In “The Yes Answer,” he deals with the difference between right and wrong—when to say yes, and when to say no. And in “Feel Good Stew” he reminds kids “It’s time to make a drawing / And give it to your mom. / It’s time to help your sister, / It’s time to help your brother. / All you need is to want to.”

These songs sound far more didactic in the telling than they do in performance, largely due to Christensen’s style. His bouncy tunes, pleasing baritone voice, and lively delivery infuse the entire CD with a festive, participatory atmosphere. While most of the songs were recorded in the studio, two are live performances, with Christensen’s young audiences very much in evidence. These are the tracks in which Christensen really shines, as his direct communication with the children enlivens the entire performance. Such is case in the closing track, “Woke Up This Morning,” a song about the joy of just being alive, in which both performer and audience whistle the chorus, “la-la” it, then “bzz-bzz” it, finally mixing all three modes together. It’s one of a number of songs on the CD that are not intended to teach something, beyond the sheer celebration of childhood—such as the title track, which is about, of all things, the all-but-uncontrollable impulse to fidget. Others of this ilk include “I Scream for Ice Cream” (“I scream for ice cream / Vanilla or rocky road. / I scream for ice cream. / I love it on the tip of my nose. / I scream for ice cream / In my banana split. / I scream for ice cream— / There’s just nothing like it.”) and “Playing Pretend” (“Playing pretend with my little girl is like / Diving in to a brand new world. / You never know what you’re gonna see, / I’m just glad when she goes that she takes me.”)

If you want to get a first-hand—well, maybe a second-hand—look at how charismatic Christensen can be, and how joyously kids respond to his songs, log on to the CD’s companion website [no longer available] and click on “Demo.” That link will lead you to a page where you can view a video of Christensen singing for the children at Little Noah’s Ark Preschool. His performance will draw you in too.