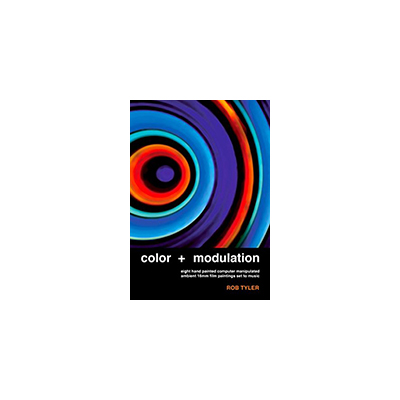 Rob Tyler’s animated films combine hand-painted film cells, computer manipulation and atmospheric electronic music to produce a hypnotic come-hither based on changing, pulsing colors that riff off a primary abstract shape to the music of Unrecognizable Now, Moksha Kusa, Carpet Music, In Support of Living, and Solar Marquardt. Although there is no indication that these films are meant for anything more than a DVD-scale viewing, Tyler’s films may recall (for those who can recall) psychedelic light shows of the 1960s, and would certainly work wonders as rave backgrounds. Their luminosity evokes close-ups of glass art being turned against the sun, their painted structures recall the early organic geometric paintings of Mark Rothko, and their interest in shifting abstract patterning has a kinship with the video projections of contemporary Los Angeles artist, Jennifer Steinkamp.

In joining visual and audio together, Tyler ’96 inserts himself within an arcane tradition that dates back to the late 19th century, known as “synaesthesia.” It was an area of particular fascination to artists, psychologists and occultists; a concept in which information from one sense is perceived subjectively in another sense, as music (sound) might produce different color (visual) impressions. Among the notable pioneers of the form was the German artist Oskar Fischinger, who began making abstract films to music in the late 1920s (and also contributed to Disney’s Fantasia in 1940).

Even more a case in point, we look to the American anthologist, collector, painter and filmmaker, Harry Smith (1923-91). During the 1940s and 1950s, Smith produced extravagant hand-painted abstract animations with musical scores, and he continued to create ambitious experimental films throughout his life. Like Tyler’s films, Smith often painted by hand directly on 16mm film celluloid. Many of Smith’s films were obsessively re-imagined as works-in-progress, as he subjected them to regular re-editing, and often showed them with varying music tracks. Some of the earliest pieces were accompanied by an improvising jazz band, and yet he also showed the same films with recorded music by such diverse musicians as Dizzy Gillespie, the Beatles and the Fugs, or in accompaniment to completely random records or even live radio. After Smith’s death, artists such as Philip Glass and DJ Spooky provided musical backgrounds for screenings. Thus have Smith’s films been variously seen as “contemporary” works as much as they were “historical.”

Smith’s intense curiosity and sense of the interconnectedness of all manner of things led him beyond hand-painted abstractions into wide-ranging montages from such varied sources as the drawings of Hieronymous Bosch, Tibetan mandalas, sketchings of microscopic life by biologist Ernst Haeckel, as well as his own footage of a Kiowa ritual, autobiographical material, street symbols, images of nature, and animation based on his own paintings.

His areas of interest seemed boundless, and he would often hold forth on such subjects as the geomagnetic field and the psyche, musicology and molecular physics, parapsychology and the poltergeist phenomena; the tarot and the Key of Solomon the King; his collections of 30,000 Ukrainian Easter eggs and Seminole quilts; and the macrocosm and microcosm and the great chain of being. He was known to enjoy alcohol, cannabis, hashish, LSD, mescaline, peyote, psilocybin and other entheogens. In his essay entitled “Alchemical Transformations: The Abstract Films of Harry Smith,” Jamie Sexton wrote: “In a time when computers had not yet nudged their way into everyday life, Smith was making a decent attempt to turn his brain into a multimedia hub….”

Why go on and on about Smith? Certainly it is incumbent on artists who would be taken seriously to know the pioneering work in their field. And for audiences who all too often find our entertainments in brief, random encounte rs with YouTube or MTV videos, we must look for depth somewhere. With Smith you encounter the raw, unfiltered quality of experimentation. So ambitious and unknown were the territories of his explorations that many of his later projects were never completed. Others were simply too complex to be presented more than as rare, staged performances (they required numerous screens or various types of projection equipment).

So the goal of these “synaesthesiasts” of the past was to reach far beyond the simple relationship between color and sound. By bringing a great storehouse of associations and experiences to a work of art, that work could express a strength and uniqueness that goes beyond playing at the surfaces of media. An artist like Smith sought to grapple with unlikely connections, to rearrange the senses and jolt habituated levels of experience into opportunities for transformed perception. He considered his work to serve as a particular kind of catalyst for social change that emerged out of personal transformation.

Tyler’s works lack the toothy sense of risk and experimentation of Smith’s films, and ignore the opportunities for disorienting site-specific architectural interventions of, say, Jennifer Steinkamp’s projection pieces. While we applaud the obsessive nature of Tyler’s process, and his compulsion to work in the under-appreciated netherworld of animated art film, it is yet difficult to watch these films without a strong sense that we are not watching something new, but something that wishes it were. The formal qualities are repetitious and the arc of narrative is flat, which leaves us with only the music as a provider of structure and progression. We might well cherish these works in the future as sketches towards something more robust, but at present they seem less a development in the ongoing evolution of experimental film and video art and more the product of “experimental-light” YouTube culture—lovely, pleasing “moving paintings” played to music.