In the 1970s, when rumors were circulating on the Washington State University campus that historic Stevens Hall was to be razed, Friel spoke out against the idea at a luncheon of graduates attending their 50-year reunion. She was unaware WSU regents were present. They got the message: Stevens Hall is special.

“Catherine Friel is the preserver of WSU’s legacy,” says Pullman native and University historian Bob Smawley. “She was determined not to let Stevens go.” The women’s residence hall was spared. In 1979, it was added to the National Register of Historic Places. “That is our [women’s] heritage on campus,” she said at the time. “If you begin to tear down your heritage, you have nothing.”

Prior to her 100th birthday November 18, Friel paused to count her blessings and reflect on a life spent almost entirely in Pullman, population 24,675.

“I’ve been so thankful that circumstances put me in a small college town, especially here.” She lives alone in a three-story home off Greek Row, near the campus and the alma mater she loves. In her comfortable living room, surrounded by antiques and late Victorian furniture, the diminutive lady eases her four-foot-seven frame into her favorite chair. Nearby on a red couch are half a dozen manila envelops in a neat row. She’s saving photos, newspaper clippings, and other memorabilia for her children and grandchildren.

Two hours of conversation pass quickly. There’s not enough time to cover a century of experiences and memories. She talks in detail about her childhood, her college days, and the University.

Her late husband, John Bryan “Jack” Friel, coached Cougar basketball teams for 30 years. That was one reason she stayed in Pullman. When their family was reared, she went back to WSU: there was more to learn. At 58, she completed a master’s degree in English. She agreed to “fill in” as teacher in senior English at Pullman High. She enjoyed teaching and decided to stay seven and a half years.

But let’s go back to the beginning.

Catherine Mathews was born November 18, 1901 in Colfax, Washington. Pullman had no hospital. Six weeks earlier, the family had moved into a new frame house on the present site of Kappa Delta sorority. Her father, Pullman attorney and one-time mayor John W. Mathews, planted the maple trees that still grace the yard. Some of the townspeople, she was told, questioned her father’s wisdom “to build so far out in the country.”

Her father died when she was 15, but Catherine says her mother, Serena, “made a wonderful life for the family. She was well versed. I learned a lot from her.”

The State College of Washington, a few small buildings on the crest of the hill, opened in 1892. The following year, Enoch A. Bryan was named college president after the departure of two short-term presidents. Catherine and Bryan’s youngest daughter, Gertrude, were childhood playmates and lifelong friends.

“I knew all six of the college’s prominent presidents personally up to President [V. Lane] Rawlins,” Friel says. She hopes to meet WSU’s current top executive, and likely will.

Friel “got along well” with President Terrell. “He gives me credit for saving Stevens Hall,” she says. Earlier, he neglected to tell her that Ferry Hall, the men’s residence hall, was coming down to make room for a new science building.

When Friel asked Terrell why he hadn’t informed her about Ferry’s demolition, his response was “I didn’t dare tell you.”

Friel and President French were “very close friends.” And she enjoyed her relationship—on and off the campus—with President Smith and his wife, Pat. President Holland, a bachelor, was a “very staid gentleman,” Friel says. “The word ‘gentleman’ aptly applied to his whole demeanor.”

Asked to comment on President Compton, she says his administration brought salary increases for faculty and additional construction on campus.

Growing up in Pullman, most of the children didn’t think their education was complete until they had earned a college degree, she says. Attending college was a “wonderful aspiration.” Going away to school wasn’t an option. It was too expensive, and besides, “kids just didn’t do that.”

Friel enrolled at Washington State in 1919 and joined Kappa Alpha Theta sorority. She held several house offices, was inducted into Mortar Board and Phi Kappa Phi scholastic honoraries; and served as president of the Army ROTC Women’s Auxiliary or “Sponsors.”

President Bryan, other early presidents, faculty members, and heads of campus living groups were invited to formal teas at the sorority houses, including Kappa Alpha Theta. There the women demonstrated their “social graces” and learned the “niceties of entertaining,” Friel says. She was Theta house manager for 30 years and served as president of the building committee when a new addition was built. The living room in the renovated English Tudor house is named in her honor.

Former president William Howard Taft visited the Washington State campus in 1920. During his stay, he awarded a silver trophy cup to the freshman class, winner of the annual Campus Day activity contest. Four “coaches” for victorious freshman teams are shown standing behind Catherine Mathews (Friel), chosen to represent the class. The setting is the dirt hillside south of the football field. She says there was much confusion. Athletic director “Doc” Bohler admitted he had forgotten to order the trophy. In desperation, he told a male student, “Run up to the Agriculture Building and take a silver cup out of the trophy case and we will use it.” Neither the president nor Catherine knew what was inscribed on the substitute cup. Taft asked her why the trophy was being awarded. She explained that the freshman girls’ team had been victorious in the class competition. Taft started to read the wording on the trophy, looked at the recipient, and kept shaking his head in puzzlement. The cup was inscribed, “Prize Bull Segus Pontiac Acme.” “Thereafter that event became ‘Doc’ Bohler’s prize story when he talked at banquets in other towns,” Friel explained.

During her freshman year, she met Jack Friel, a native of Waterville. He studied in the library where she worked evenings for 25 cents an hour. Was it love at first sight? She thinks so, at least from her point of view. He was three years older, a World War I veteran who served with an artillery unit in France.

“Freshman girls felt very sophisticated going with older men who had been to Europe,” she says. The pair enrolled in a history class together and dated through graduation in 1923. Her degree was in English, his in political science, history, and economics. Both accepted three-year teaching assignments, a requirement then for a teaching certificate. When apart, they dated others, but the two “wrote each other every day.” She taught high school English in Dayton. In addition to teaching, Jack coached football and basketball, first at Colville High School and then at Spokane’s North Central High. His 1928 NC team captured the state basketball title.

After winning 495 basketball games at WSU, Coach Friel was nominated for the Naismith Memorial Hall of Fame. Despite his record and directing the Cougars to the 1941 NCAA Championship game—a 39-34 loss to Wisconsin—he failed to receive the required votes for induction.

“To his own detriment, he never went to the NCAA coaches meetings,” his widow says. The College didn’t have the money to send him.

Her husband didn’t plan to be a coach. He wa
s a teacher. After a game, he would come home and often pick up a thick book. “He was a real student of political science, history, and economics,” she says.

In those days, Coach Friel didn’t go out and bring in players. He took the boys who came, many of them off the farms, and “made basketball players out of them,” she says. His former players still send her Christmas cards. Two—Scott Witt ’43, Tacoma, a retired Weyerhaeuser executive, and Robert Sheridan ’47, Wilsonville, Oregon, a retired professor of dentistry at the University of Oregon Health Sciences Center—always visit her when they come to campus.

Catherine Friel has received numerous awards and honors. None is more cherished than the WSU Foundation’s 1999 Outstanding Service Award. It is displayed near the front-door entryway of her home.

She traces her interest in English literature to her mother, a member of the Fortnightly Club, a women’s literary club formed in 1893 by President Bryan’s wife.

“She [Harriet Bryan] thought women should get out of the house and away from the children on occasion,” says Friel, a third-generation member of the club. “We didn’t give book reports. We really studied and evaluated the writers.”

Now, it is hard to fill the membership, which is limited to 25 for the twice-monthly afternoon meetings. “Everyone is working,” she explains.

When Catherine was being interviewed for the senior English literature teaching position at Pullman High, she recalls, superintendent Louis Bruno pointed a finger at her and said, “I want you to get these kids ready for college.”

She did. In fact, she quickly gained a reputation for the volume of written assignments she required of her students. “Some of their parents loved me, some hated me,” she says.

Friel enjoyed working with students, many of them bright children of WSU professors. She tells of being stopped on the street a few years ago by one of her former students, then attending Washington State. “Mrs. Friel, I used to curse you every day,” she said. “Now I bless you every day.”

Reflecting on her life in Pullman, she says, “I feel so lucky that I live in a college town. You can walk a block to campus and have all this culture. You don’t have to travel miles and miles to get it. The culture comes to you.”

Friel Court in the Beasley Performing Arts Coliseum is named for her husband. After retiring from the University, he became the first commissioner of the new Big Sky Athletic Conference. When the WSU Athletic Hall of Fame opened in 1978, Coach Friel was an inaugural inductee. He died in 1995 at age 97. Jack and Catherine had been married nearly 70 years.

To what does she credit her longevity? The question has been posed before, many times.

“Some people say, ‘I don’t smoke.’ Or, ‘I don’t drink,’ ” she says. Catherine Mathews Friel offers another option.

“I think it’s the benefits of modern medicines.”

Former president William Howard Taft visited the Washington State campus in 1920. During his stay, he awarded a silver trophy cup to the freshman class, winner of the annual Campus Day activity contest. Four “coaches” for victorious freshman teams are shown standing behind Catherine Mathews (Friel), chosen to represent the class. The setting is the dirt hillside south of the football field. 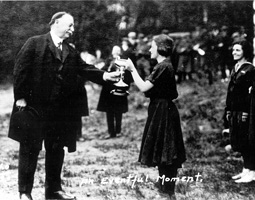 She says there was much confusion. Athletic director “Doc” Bohler admitted he had forgotten to order the trophy. In desperation, he told a male student, “Run up to the Agriculture Building and take a silver cup out of the trophy case and we will use it.”

Neither the president nor Catherine knew what was inscribed on the substitute cup. Taft asked her why the trophy was being awarded. She explained that the freshman girls’ team had been victorious in the class competition. Taft started to read the wording on the trophy, looked at the recipient, and kept shaking his head in puzzlement. The cup was inscribed, “Prize Bull Segus Pontiac Acme.”

“Thereafter that event became ‘Doc’ Bohler’s prize story when he talked at banquets in other towns,” Friel says.