Washington State University’s sculpture “The Reader” made its first appearance on campus in 1949. The Powwow, the college’s alumni magazine, carried the following story in 1949, which showed the mixed response to the large ornament dubbed “Nature Boy” by the students.

What’s New on the Campus?

Campus conversational piece de’ resistance this month concerned the 30-foot limestone figure which now adorns one corner of the new Ernest Holland Library. Student opinion and comment blew hot and cold, for and against the 40-ton ornament. Some say it is beautiful, some say it looks phhhht.

A compromise between the traditional and modern, according to sculptor Dudley Pratt, the figure has drawn attention not only from students and campus visitors, but from the press as well.

Student interest prompted Evergreen editor Bob Berry to gather data and opinion for a click story in the college blat. He found: the cost of the statuary came to $21,618; that the minor civil war of campus opinion regarding its worth and beauty was just about evenly split, and that “Nature Boy,” as the students have dubbed the stupendous ornament, is at least worth its 40 tons in publicity.

In the meantime, “Nature Boy,” whether it is an embodiment of the spirit of the rolling hills of the Palouse, or whether it might be emblematic of a tired student who has just flunked a chem exam, continues to look over old College hill from his high perch, and take ridicule and praise with an unbiased, cool aplomb. 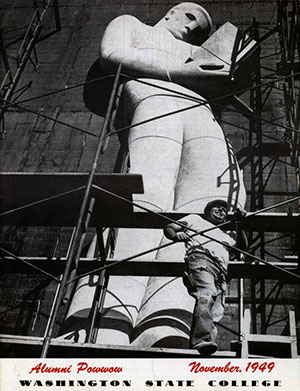 A smiling workman, the 30-foot sandstone figure gracing one corner of the new Ernest Holland library, plus light and shadow combine to make an interesting cover photo this month. Students have dubbed the 40-ton ornament “Nature Boy.” 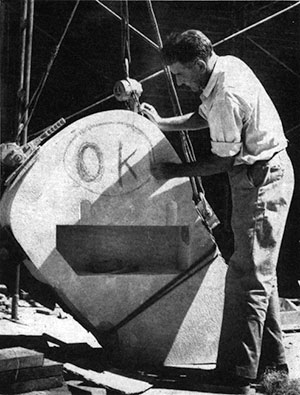 Dudley Pratt, sculptor of “Nature Boy,” puts his OK on the head of the 30-foot sandstone figure, just before the piece was hoisted into place on the side of the Ernest Holland library. 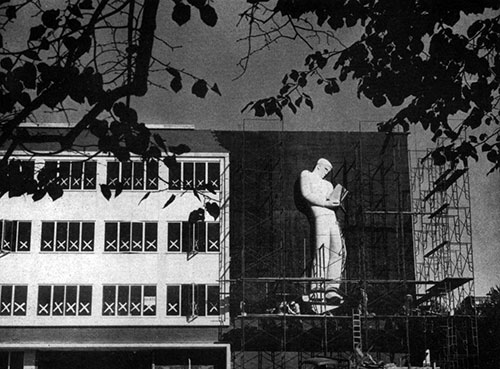