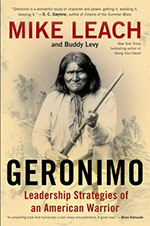 Read more about the book Geronimo: Leadership Strategies of an American Warrior by Mike Leach and Buddy Levy. (You can find purchase links for the book here.)

The Making of a Warrior (Discipline)

They Called Him Geronimo: What’s in a Name?

GERONIMO WAS BORN in 1823 at the headwaters of the Gila River east of the border of present-day Arizona and New Mexico.* His Bedonkohe (pronounced Bed-on-koh-hey) Apache name was Goyahkla, meaning “One Who Yawns.” But he wasn’t bored or boring. He was defiant, independent, and exceptional. The story of how he got his later name is a good one. In a revenge attack against the Mexicans, the young warrior Goyahkla fought like a fiend, rushing in repeatedly from cover, killing an enemy with every charge, and stealing the dead man’s rifle. Each time he came at them, the Mexicans cried out in terror, “Look out, Geronimo!”—mispronouncing his given name or calling out for the help of Saint Jerome (which translates in Spanish to “Geronimo”). His Apache people took up the battle cry, and “Goyahkla” became “Geronimo.”

During his raids and escapes across the American Southwest, the mention of his name had the power to enrage the highest brass of the U.S. military—including presidents—and to terrify white settlers who bolted their doors and windows and scribbled frantic letters to the White House begging for protection. Over time, Geronimo’s name has come to symbolize courage, daring, wild abandon, and leadership. Revering his courage, World War II paratroopers shouted “GERONIMO!” as they leaped from airplanes into battle. The first time I ever heard the name “Geronimo” was as a small child watching Bugs Bunny. I think it involved Yosemite Sam yelling “GERONIMO!” as he was preparing to pull one of his courageous and daring stunts. The last significant time I heard the name Geronimo was when U.S. Navy SEALs moved in to kill Osama bin Laden. The mission was code-named “Geronimo,” which caused considerable controversy. I can’t think of another historical figure whose name has withstood the test of time and been used in as many contexts as Geronimo’s. His name is consistently associated with courage, ingenuity, and resourcefulness.

*The exact place of Geronimo’s birth is unknown and contested. See the map at the front of the book. Historians are split—some say Arizona, some say New Mexico. Geronimo himself said Arizona, but back then it was neither Arizona nor Mexico—it was Apache country. See S. M. Barrett, His Own Story, 3–4; Debo, Geronimo, 7–8. His birth date is often cited as 1829, but it was more likely 1823.