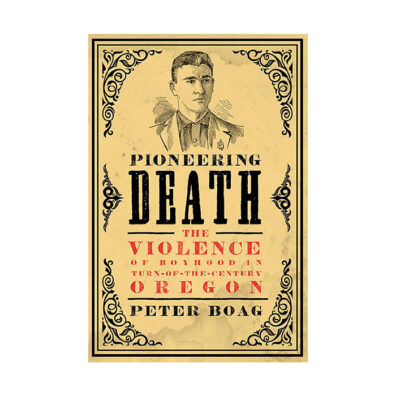 His father slapped him, commanding him to tend to his chores. Instead, the 18-year-old marched into the farmhouse where he lived with his parents and siblings, grabbed his father’s rifle, and shot him in the back of the head before turning the weapon on his mother and a community member who had stopped to chat.

The more historian Peter Boag learned about the killing in west Linn County⁠—and its place in the larger social and cultural contexts of nineteenth-century Willamette Valley⁠—the more it disturbed him. The history professor and Columbia Chair in the History of the American West at Washington State University opens his latest book with a scene that the local newspaper described in 1895 as “wholesale butchery.” He uses the triple murder as a gripping entry into the landscape of western Oregon in the mid to late 1800s.

“Rural Oregon was a dangerous place for children,” he writes, noting boyhood in particular was rife in that era with disease and accidental deaths⁠—from drownings to hunting accidents and more. His well-researched work examines the perils, pitfalls, and paradoxes of Pacific Northwest pioneer history: the hidden childhood traumas of the American West, the inherent violence of Manifest Destiny, anxieties surrounding global capitalism, and rural and agricultural decline.

The day before the killing, Loyd Montgomery, who was “descended from an esteemed pioneer family,” left to go hunting without notice or permission. When he returned, he was admonished by his father for shirking farmwork and instructed “to go and cut some wood.” Loyd was arrested the next day for murdering his parents, John and Elizabeth, and Daniel McKercher, proprietor of the local gristmill, who “sided in with father when we were quarrelling,” Loyd said in the Oregonian on November 26, 1895.

Just before the shooting, McKercher and the Montgomery family patriarch, an impoverished farmer, had been engaged in conversation about the persisting economic depression, general scarcity, and mounting debt. Hops prices were down. Uneasiness was increasing. Society was rapidly industrializing and urbanizing. The agrarian⁠—and often romanticized⁠—way of life was in crisis.

Boag’s scholarly exploration connects the Montgomery murders to their place and time⁠—during a changing economy, as rural populations were decreasing and depression was setting in, a generation or two removed from Oregon pioneers’ westward expansion, in the aftermath of the so-called Indian wars and killing of missionaries Marcus and Narcissa Whitman.

He weaves in stories of early settlers, many with ties to the Montgomery family, as well as the chores and routines of daily farm life, brutality of boyhood, and problems of manliness in mid to late nineteenth-century Oregon. This interesting analysis will make readers glad they didn’t grow up as boys in that era.