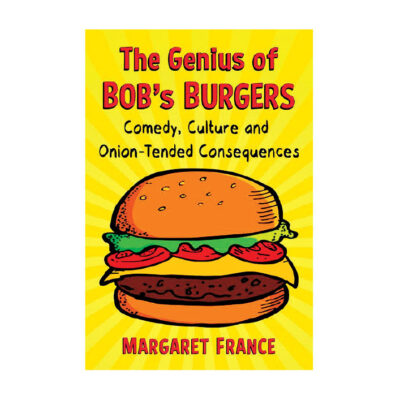 The nine provocative essays in this scholarly study of Bob’s Burgers examine what it means that an animated sitcom about a struggling family burger joint not only exists today⁠—and has since 2011⁠—but why it resonates with modern audiences in such particular ways.

Margaret France, who has a doctorate in English literature and teaches at Yakima Valley College, argues that the show deserves “recognition as an ongoing meditation on what it means to be a member of a family, a class, and a country in twenty-first-century America.”

Writing from 2015 through 2020, France cites episodes from the first ten seasons, relating them to “larger cultural issues, particularly those of identity, whether that identity is defined by age, gender, sexuality, or family roles.” She contemplates their multigenerational appeal, observing that Bob’s Burgers “has become a hearth around which a wide variety of adults and children can gather.” She also explores specific moments in which the show reveals rifts between generations.

France admittedly adores Bob’s Burgers⁠—her favorite guest voice is Jon Hamm as a talking toilet⁠—and her collection of well-researched and insightful academic arguments will help fans delve deeper into its significance as a cultural artifact. It will get readers to think more deeply about the show and develop their own arguments surrounding its place in modern American television and popular culture.

France considers the influence of birth-order theory on Bob’s Burgers, discusses “what a baby boomer fantasy looks like through the lens of Generation X”⁠—particularly through parodying and rejecting stereotypes portrayed in Steven Spielberg’s early films⁠—and investigates the cross-casting of characters. Her critical commentary, like the show itself, will appeal to readers across generations.