These luscious ruby-colored gems embody the gentle, fleeting sweetness of summer. Their season is short, just two to four weeks for most June-bearing varieties. You don’t want to miss it.

“Most Pacific Northwest strawberries are not going to stand up to shipping and handling,” says Wendy Hoashi-Erhardt, who directs the small fruit breeding program at Washington State University’s Puyallup Research and Extension Center. “But, as a frozen export, our strawberries are enjoyed all over the world.”

Washington state is known, she says, for its “really deeply colored and richly flavored fruit.” But only a small portion of its strawberry crop is sold for fresh use. So when you find locally grown strawberries at a farm stand or farmers market, snatch them up.

They’re best enjoyed the day they are picked⁠—paired with whipped cream, dipped in chocolate, tossed with baby spinach leaves and balsamic vinegar, arranged atop a tart or Pavlova, or puréed into sauces for pancakes, desserts, or a rich and savory entrée. Strawberry sauce goes great with tangy goat cheese and tender beef steak, the signature dish at Amsterdam’s cozy and popular Van Kerkwijk restaurant. Why not attempt to recreate it at home with WSU Premium Beef and WSU-developed strawberries?

Several of the most popular varieties grown today in Washington, Oregon, and British Columbia were developed by WSU or are derived from WSU cultivars. The newest WSU strawberry release, Puget Crimson, debuted 12 years ago. The extra-plump and juicy variety was first cultivated by now-retired WSU strawberry breeder Patrick P. Moore and Hoashi-Erhardt. Moore also developed the Puget Reliance and Puget Summer varieties, respectively released in 1994 and 1998.

WSU breeds strawberries (Fragaria x ananassa) for hardiness, high yields, disease resistance, and characteristics such as firmness and size⁠—along with that aforementioned intense color and flavor. These qualities are coveted for use in high-value products such as ice cream, yogurt, jam, and frozen whole-berry mixes.

Most Washington state strawberries are produced in Skagit and Whatcom Counties. But strawberries grow well throughout Western Washington, which offers an “an ideal environment” for growing strawberries, Hoashi-Erhardt says. “Strawberries tend to grow well where temperatures are mild in both winter and summer.”

Washington state has a long history of cultivation, dating to the 1830s. But, during the last 50 years, Hoashi-Erhardt says, “The market has changed a lot. Washington and Oregon used to be major strawberry producers in the US. Starting in the 1970s, California became the dominant player.” Its strawberry yield more than tripled between 1974 and 1994. Today, California grows more than 90 percent of the nation’s strawberries. Washington grows about 1 percent.

Hoashi-Erhardt is part of a team of regional researchers proposing to study the state of the Pacific Northwest strawberry in an attempt to strengthen the industry following the dissolution of the Washington Strawberry Commission in 2018. The project includes an economic analysis as well as establishing a grower task force to determine the feasibility of organizing a new association to oversee marketing and set priorities.

Plus, “Lots of important varieties are derived from WSU material,” Hoashi-Erhardt notes, such as Sweet Sunrise, released in 2014 by the USDA in Corvallis, Oregon. The offspring of WSU’s Puget Reliance, Sweet Sunrise is one of the earliest varieties to ripen. It has high yields, large fruit, and sweet flavor, and is suited for both processing and fresh use.

WSU’s focus has historically been on June-bearing perennials. In the 2010s, the program was also developing day-neutral and ever-bearing strawberries, productive from May to October in Washington and well-suited for the fresh market.

US consumption of fresh strawberries has nearly doubled in the past 20 years, up from 4.86 pounds per capita in 2000 to 8.5 in 2020. The demand is there, says Hoashi-Erhardt, the fifth person and first woman to direct WSU’s small fruit breeding program. She took the helm in 2020.

“I personally think strawberries have a special place in Washington as a specialty crop,” she says. “Everyone loves strawberries. And we produce some of the best strawberries in the world.”

One of her favorite ways to enjoy them is to simply buy a flat of Puget Crimson and take it to a party. Says Hoashi-Erhardt, “They are gone in 15 minutes.”

Puget Crimson (2010) is a late-season, high-yielding, large-fruited, June-bearing strawberry with excellent flavor and color. It’s moderately firm and well suited for both processing and fresh use, but generally favors fresh use. “It is, in my opinion, the flavor standard of strawberries grown in the Northwest,” Hoashi-Erhardt says. “People ask for it by name at farm stands because of its fresh-eating quality. It’s one of the best-flavored strawberries you can get here.” 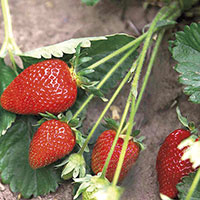 Puget Summer (1998) is a medium-sized, very late-season strawberry with excellent flavor and low fruit rot. Plants sales peaked at 780,500 in 2012 in Washington, Oregon, and British Columbia. 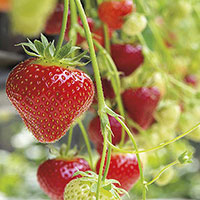 Puget Reliance (1994) is a virus-tolerant, mid-season, high-yielding strawberry with good flavor and color. Its fairly soft large fruit is best suited for processing, but some growers also produce this variety for fresh use. Plant sales peaked at 1.823 million in 2007 in Washington, Oregon, and British Columbia. 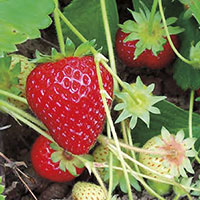 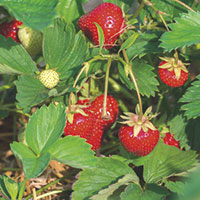 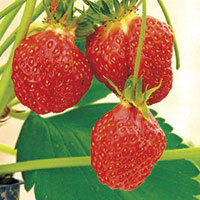