James Donaldson stands tall, projecting the pride and power of a former collegiate and professional athlete. The former Washington State University basketball and NBA player towers above most everyone, even other NBA players. Their average height: not quite 6 feet, 5 inches. He’s 7 feet, 2 inches.

People look up to him in more ways than one. That’s what his first book is about. Standing Above the Crowd explains his strategies for success in athletics, business, and more. A few years after its 2011 publication, though, a series of stressful events changed his outlook. “I looked OK. I seemed like I was fine. But,” Donaldson says, “I wasn’t my normal self anymore.”

Donaldson (’79 Socio.) had nearly died, enduring four major surgeries in five years. His business began faltering. He owed back taxes. Money was running out. His wife left, taking his stepson with her. His mom died. Holiday season hit.

“The walls were closing in on me,” Donaldson says. “The loneliness was kicking in. And I just could not sleep. My mind was racing 100 miles an hour, trying to figure out how to save my business and how to exit this world. Those were my two all-consuming thoughts, especially at night. I really did not think I was going to make it. Life wasn’t worth living anymore. It was all dark and hopeless.”

Donaldson details his struggle in his latest book. Written during the COVID-19 pandemic lockdown and published at the end of 2020, Celebrating Your Gift of Life: From the Verge of Suicide to a Life of Purpose and Joy aims to conquer the stigma of men, especially male athletes and men of color, showing perceived weakness by talking about mental health and asking for help. “Most men just won’t go there,” Donaldson says. “I want them to see that I’m a big man, a strong, athletic guy, and I’ve gone through the same stuff and made it through.”

“I still went to the gym every day. I was still running three or four days a week. I was eating right. I’ve been a vegetarian for 35 years. I don’t smoke. I don’t drink. I never did drugs,” says Donaldson, who suffered from aortic dissection at 57 in 2015. “It came out of nowhere. I had no idea I had any kind of heart issues.”

Things snowballed throughout the next three years. The period from Thanksgiving to Christmas 2017 was Donaldson’s darkest. At first, “I thought I had a sleeping disorder,” says Donaldson, who made an appointment to see his doctor. After months of spiraling downward, “he quickly diagnosed me with having depression and anxiety and suicidal ideation.”

Donaldson started seeing a counselor, taking anti-anxiety medication, and reaching out. He contacted a small group of “go-to guys”⁠—including Coach Raveling, Coach Wilkens, and former WSU quarterback Jack “Throwin’ Samoan” Thompson (’78 Busi.)⁠—asking if he could call or text at one or two in the morning if he needed to talk. “Men, especially athletes, are used to drawing up a game plan and getting to a goal. I needed someone or something driving me toward where I needed to go.”

Donaldson felt compelled to start sharing his struggle after the January 2018 death by suicide of a fellow Coug. WSU junior quarterback Tyler Hilinski was 21. “I didn’t know him, but his death shook me to the core,” Donaldson says. “I think the reason it resonated with me so much was because we were both Cougar athletes. His death motivated me to fight back and make mental health my new advocacy.”

In 2019, he established Your Gift of Life, a nonprofit foundation for mental health awareness. Before the pandemic, he visited schools, sharing his experience and message with students. Today, he aims to continue that work as well as to raise money for scholarships for people of color studying to go into mental health professions. “It’s become the next chapter.” 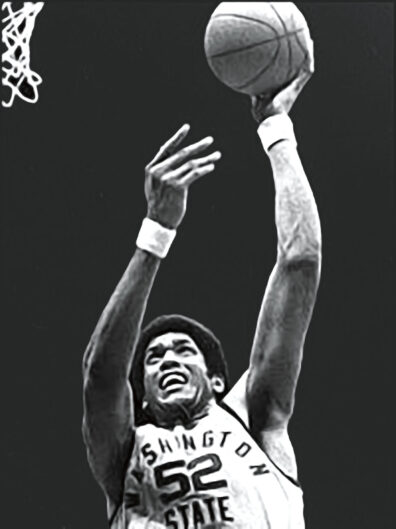 Video and more stories about Donaldson