Beyond time and distance

During a pregame tailgate party at my parking spot near Jordan Hare Stadium, I espied some Cougar fans heading to the stadium.

I took her hand, led her to a shady chair, gave her water. We invited them to rest, share our BBQ and drinks.

We welcome, honor, and respect our visitors, share our hearts, become friends, the Southern way, the Auburn Family way.

We walked with them to the stadium.

A few years later, my wife and I and some Auburn friends traveled to Seattle to embark on an Alaska cruise. We met with Denny, Bonnie, and some Cougar friends for an evening of friendship and nostalgia.

In 2010, my wife and I traveled to Seattle, stayed at Denny’s house, traveled to Pullman, watched a Cougars game, experienced the Palouse, WSU campus, and game weekend.

In 2011, we met Denny and Bonnie in Phoenix for the Auburn-Oregon BCS National Championship game. I gave my tickets to some Auburn grads. An Oregon friend and I, Denny and Bonnie, watched the game from his desert condo.

WSU again traveled to Auburn in 2013. Denny and a friend stayed in our Atlanta home for a magnificent game weekend. We drove down to Auburn, showed them around our campus and provided them club level seats, food and drink, surrounded by welcoming and friendly Auburn Family folks.

After WSU beat UW, I called Denny from the North Carolina Outer Banks; after the 2013 Auburn-Alabama (Iron Bowl) “Kick Six” epic, Denny called me from the Olympia Pig Bar. Both conversations had to overcome unspeakable stadium/bar noise.

Denny and I joined our respective Alumni Associations. I’ll continue my WSUAA membership in his honor. 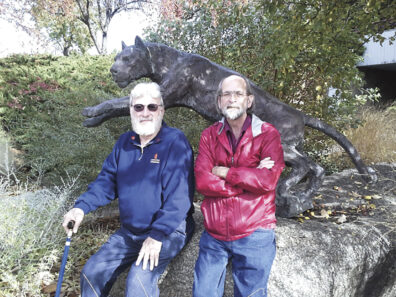 Thanks for the story about Harry Edgar Goldsworthy by Adriana Janovich. When I saw that name, I wondered if they named Goldsworthy Hall after him. [The hall was named after his father, Harry E. Goldsworthy Sr. ⁠—Ed.]

I lived in Goldsworthy Hall in 1976, my freshman year at WSU. Although my overall experience at Goldsworthy Hall was not pleasant, it is how I met my best friend, so the place is important to me. On Harry’s Wikipedia page, I found out that he lives in California, was born in Spokane, spent time in Pennsylvania at the Army War College, and in June 1967 he assumed command of the Aeronautical Systems Division at Wright-Patterson Air Force Base, Ohio. I grew up in Los Angeles and Spokane, worked in various human factors research labs in Pennsylvania for over three decades (including one job with the Navy), and now work in a lab at Wright-Patterson AFB.

Thanks to your story, I feel a little more connected to Harry Edgar Goldsworthy and the world seems just a little bit smaller and friendlier.