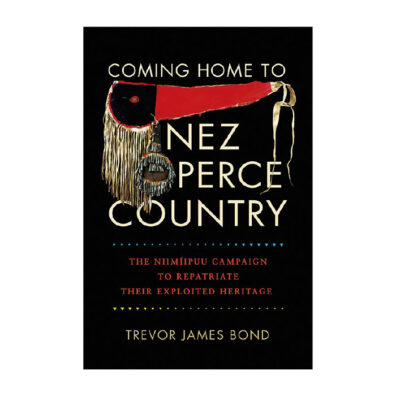 Missionary Henry Spalding shipped two barrels of “Indian curiosities” in 1847 from his Idaho mission to his friend Dudley Allen in Ohio with the intent of obtaining barter goods. Spalding had coerced Nez Perce (Niimíipuu) tribal members and traded for their exquisite shirts, dresses, baskets, and more items, many of them beautifully decorated with porcupine quills, dentalium shells, beads, rare elk teeth, and other ornamentation.

The collection then endured a saga of more than a century, one that’s rife with questions about how Native cultural history is acquired, traded, sold, and eventually owned. Spalding spoke against Native culture and demanded that Nez Perce cease their migratory life and settle as Christian farmers, all while gathering and bartering away their material items of cultural significance.

The collection languished in storage until inquiries in 1970, but Oberlin College faculty couldn’t find it. After identification in the mid-1970s, the OHS agreed to loan the collection to the National Park Service for display at the Nez Perce National Historical Park.

Then, in 1993, the OHS suddenly recalled the collection, valued at $608,100. The OHS agreed in 1996 to sell the collection to the Nez Perce Tribe for that amount but gave them only six months to raise the money. Considering the tribe’s resources, it was a daunting sum.

The ensuing fundraising campaign went global and raised the profile of the cause. Support came from schoolchildren’s bake sales and car washes, MTV public service announcements, and donations from grunge bands Pearl Jam, Soundgarden, and other musicians. More than 2,000 individuals donated to the fund and the Nez Perce Tribe raised the amount with a day to spare.

Trevor James Bond, codirector of the Center for Digital Scholarship and Curation and associate dean at WSU Libraries, tells this fascinating story through interviews with Nez Perce experts such as Nakia Williamson-Cloud, historical records, and media reports. As part of his research, Bond commissioned photographs of the collection, which are included in the book and emphasize the stunning details of the Nez Perce clothes, horse regalia, cradleboards, and the rest. Williamson-Cloud also recorded interpretations of several items, available on the Plateau Peoples’ Web Portal housed at WSU.

In a June 2021 ceremony, 25 years after it was finally secured, the Spalding-Allen Collection was renamed by the tribe. After careful deliberation, they chose wetxuuwíitin’ as the new name. It means “returned after a period of captivity.”