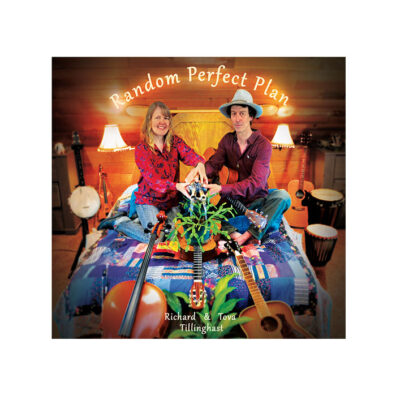 All 13 songs on this eclectic, poetic, folksy album are written and performed by a husband and wife who have been married for 10 years and making music together since 2005. He’s a bluesy guitar-playing singer-songwriter with an evocative voice. She’s a classically trained soulful cellist who also sings, whistles, and plays violin and accordion. Their new rootsy Americana offering explores themes of heart and home, roaming around and settling down, bucking societal norms and finding one’s place in the world. Both wistful and whimsical, Random Perfect Plan and its accompanying series of “backyard music videos” serve up a sense of nostalgia along with a celebration of family, relationships, and life’s simple pleasures.

Richard Tillinghast found his way to WSU Vancouver after he learned he was going to become a father. He commuted to campus several days a week for two years from his home near White Salmon. Years before, he had started college on the East Coast, but family tragedy and the itch to travel took him overseas. He wandered the world, making a living through music, kayaking, and horse-wrangling. It was kayaking that led him to the Columbia River gorge in 1999. After graduating, he used his degree to counsel teens. He says, “It’s still my dream to combine therapy with music and river travel.”