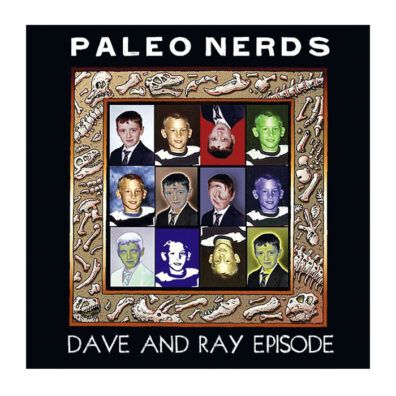 Who qualifies as a “paleo nerd?” Any adult “who still has the child-like wonder and love for dinosaurs, fossils, science, and paleontology,” according to the show’s website. But non-nerds might like Paleo Nerds, too.

This discussion of deep time is as approachable and amusing as it is informative. It’s a paleo party full of dinosaur dad-jokes, fossil facts and anecdotes, and visits with world-class experts, including paleontologists and museum directors, in a sort of Car Talk meets Bill Nye the Science Guy podcast for grown-ups. Ray Troll, an artist in Ketchikan, Alaska, and David Strassman, a ventriloquist in Ojai, California, explore natural history, particularly landscape evolution and ancient creatures, as well as the current environment and climate change.

In the first episode, Troll and Strassman interview and introduce each other, tracing their paleo passions from a set of plastic toy dinosaurs to a trip with dad to the La Brea Tar Pits as a young boy. The second episode features Kirk Johnson, the endowed Sant director of the Smithsonian National Museum of Natural History and longtime friend and collaborator of Troll. Subsequent episodes include “STEMinist” Amy Atwater, paleo collections manager at the Museum of the Rockies, and Leif Tapanila, director of the Idaho Museum of Natural History. As experts talk about their areas of expertise, Troll and Strassman banter back and forth, explaining scientific terms in quick asides.

Launched in July 2020, Paleo Nerds provides a fun and fascinating celebration of science, brimming with stories about fossils, from scouting for crab concretions in Clallam County to big finds that lead to new discoveries and end up in museums. There’s also at least one “your mom” joke: “Your momma was a lobe-finned fish.” Troll and Strassman are relatable hosts, correcting each other’s pronunciation and facts, cracking jokes, and helping us understand how we as humans came to be here.