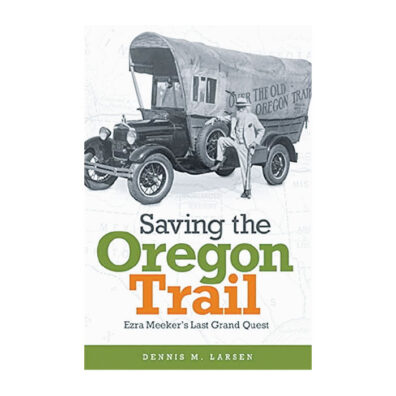 Ezra Meeker went back the way he came: in an ox-drawn covered wagon. He was a man on a mission, and no one and nothing—not his wife nor his children, and certainly not a lack of funds—could stop him. He was stubborn, resilient, resourceful, restless. And he had lots to do.

The president and a charter member of the Washington State Historical Society, first mayor of Puyallup, and one-time “Hop King of the World” wanted to mark the fast-disappearing Oregon Trail with monuments and preserve the memory of a generation that came West via the overland route like he did in 1852. So, in 1906 at age 75, he embarked on a two-and-a-half-year adventure, which Meeker dubbed “The Old Oregon Trail Monument Expedition.”

Many regarded his plan as a quirky idea from an energetic and eccentric old man. Meeker was nothing if not scrappy and, at this stage in his life, perennially short on cash. To fund his cross-country travels, he borrowed money, lectured, and sold postcards and books and pamphlets that he authored.

Meeker set out in 1910, turning 80 on the road. In 1916, he crossed the continent again, this time in an auto resembling a covered wagon. The Prairie Schoonermobile is one of more than 30 photos, illustrations, and maps in the book.

The fourth installment in Dennis Larsen’s multivolume biography tracks Meeker from 1901 until his death in 1928 at nearly 98 years old. The author draws on some 50,000 pages of Meeker’s letters and papers to document the end of the trail of a complicated Pacific Northwest character and pioneer. Larsen provides a fascinating look at the schemer, dreamer, and doer, a busy risk-taker who was hardly at home and made national headlines during the last quarter-century of his extraordinary life.

Meeker platted Puyallup, dabbled in motion picture-making, drew crowds as he drove his covered wagon down Broadway, met President Theodore Roosevelt, and joined the cast of a Wild West show in 1925 when he was 94. At 96, he sold commemorative coins out of the back of his covered wagon in Tacoma to benefit the newly formed Oregon Trail Memorial Association, which he founded.

Also in his 90s, Meeker wrote a romance novel and children’s book, and flew across the country in a biplane. When he died, he was planning another cross-continent trip in another motor vehicle made to look like a covered wagon. Just before he passed, he whispered to his daughter that he wasn’t quite ready to go. His work, he explained, wasn’t finished.

Buy the book at WSU Press