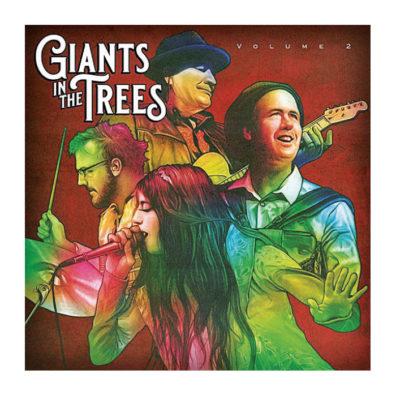 Giants in the Trees

In their simply titled sophomore offering, Giants in the Trees have established their stride. Jillian Raye, Erik Friend, Ray Prestegard, and Krist Novoselić (’16 Soc. Sci.) have spent more than two years honing their sound—from the old creamery building where they practice to last year’s inaugural Thing festival in Port Townsend. Their second album—heavier, stronger, and tighter than their debut—features 39 minutes of ten varied tracks of moody, melodic, and modern Americana, punctuated with whimsy and, at times, trippy, psychedelic pop.

Novoselić is by far Giants’ most famous member, known as the bassist and co-founder of the iconic grunge band Nirvana. Born in a grange hall in a sylvan setting in southwest Washington, Giants offer their own dynamic and interesting brand of rural Pacific Northwest rock—folksy, fun, funky, dreamy, danceable, rootsy, and all-around approachable.

They emerged from the woods of Wahkiahum County in 2017 with a self-titled album. (Their name comes from the chorus of “Sasquatch,” arguably a quintessential PNW anthem, evoking images of towering pines as well as mysterioso echoes of avant-garde space rock.) Raye’s haunting, ethereal, sultry, sometimes husky vocals are supported by a trio of seasoned musicians: Friend on percussion, Prestegard on guitar and harmonica, and Novoselić on bass and accordion, a staple in the Croatian-American community in which he grew up. Raye also plays banjo and guitar. They enjoy playing together, and it shows.

Their Volume 2 opener, “Feel You Now,” kicks off with Novoselić’s accordion, which—together with Raye’s soothing vocals, Friend’s slow and steady percussion, and Prestegard’s mastery of strings—sets a mellow, if somewhat melancholy, tone. Novoselić’s accordion also features prominently on the last track, the whimsical and waltz-like “Nevermore.” In between, find the funky “Star Machine,” country-esque “Sons and Daughters,” and catchy “Hot Blooded” and “My Name” that—with their repetitive lyrics—will have new listeners singing along in no time.