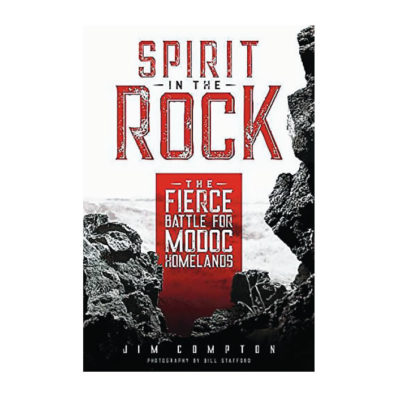 Descending a great bluff towering above an endless sea of black in early 1873, the militiamen clench their rifles tighter as they wade into a thick gray fog among southern Oregon lava beds. A deafening crack and the flash of gunpowder pierces the dense mist. War paint-clad Modoc snipers poke their muzzles out between cracks in the blackened rock and fire unseen upon their adversaries. The bewildered U.S. troops search frantically through the opaque hellscape for any sign of the enemy, and then flee to the hills with 10 percent of their force dead.

The humiliating defeat of more than 1,000 soldiers to 66 Native Modoc warriors fighting from their impregnable fortress is but one of the Modoc War’s many brutal tales, each recounted in grisly detail through Spirit in the Rock.

Compton’s thorough research culminates in a richly detailed account of the Modoc War, bringing clarity and balance to the distorted narratives about Native Americans commonly portrayed in history books. Compton packs each page with comprehensive depictions of each character involved in the conflict, along with visceral descriptions of battles so lucid you’d swear he witnessed them himself.

Despite their victory at the lava beds, the Modoc people could only hold back the forces of westward expansion for so long. Their tale is a brutal, yet familiar one — a microcosm of the nineteenth century’s “manifest destiny” mentality that viewed Indians as mere “rocks in the road” on the journey west.

For centuries the Modoc people prospered in the scrubland of Oregon’s Klamath Basin. However, a few enterprising settlers bent on running freight trains through the tribe’s ancestral lands upended their harmonious life in 1870, corralling the Natives into a cramped reservation shared by a rival tribe. Tension between the Indians and settlers grew quickly, stoked by salacious newspaper stories and eye-for-an-eye killings by both sides. Life on the reservation soon became unbearable and the Modocs, burned in peace talks, went to reclaim their homeland, leading them to battle with the U.S. Army.

What followed was the most expensive conflict between the United States and Natives in the country’s history. Compton’s blend of dogged fact-finding and storytelling prowess paint a portrait of that piece of American history that’s as beautiful as it is disturbing.