I enjoy finding and connecting bits of information discovered serendipitously that bring enlightenment just as the researchers were enlightened about Broborg glass by chance conversations and discussions. “Fires Burned, Cauldrons Bubble” [Spring 2018] reminded me of a fairy tale, “Princess on a Glass Mountain.” Knowing that fairy tales and storytelling are often embellished verbal histories based on a fact (a particular time, place, person or event), I researched it. The Norwegians, Swedes, and Poles have versions: a glass mountain, princess, and golden apples growing on top. Perhaps the Swedish Vikings carried the tale to Poland as the Swedish Vikings usually traveled north and south through Poland and Germany unlike the Norwegian Vikings who sailed west. I am delighted to discover that one of the princesses may have lived on the Broborg fortress. Again serendipity connects, illuminates, and fosters new knowledge. The story appears in the Yellow Fairy Book.

I read with interest the article “Finding Identity and Expression at WSU” in the summer issue of Washington State Magazine. I began my freshman year at WSU in the fall of 1967 and, like Bob Dlugosh, kept my emerging same-sex sexual awareness secret from those around me. I dated men occasionally to maintain my cover, all the while “crushed out” on my freshman roommate and other female students throughout the time I was in Pullman. Finally, after four years of unrequited love, alcohol-infused nights, and near-failing grades, I dropped out a semester shy of graduation. It wasn’t until 1997, 30 years after I began, that I finally earned my BA from WSU. It might have been a different experience for me and other lesbian and gay students had their been a “center” then, but at least there’s one now for students like Becca Prescott and her classmates!

I applaud WSU for taking seriously the need for such a gathering place to provide a safe haven for those students who are LGBTQ. Thank you for sharing the stories of these former students. Many more remain secret.

Dick Fry and I have been close friends since we shared an office in the WSC News Bureau about 60 years ago. I was telling him about a family picture that’s a bit of Coug history not remembered. 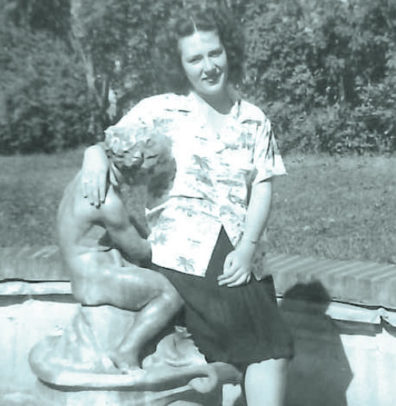 The picture shows Katie Gochnour sitting next to “Minerva,” in the small pool that was a hallmark of the Stimson dormitory. Even Dick was surprised to know Stimson was a women’s dorm when this picture was taken. We think it had to be fall of ’45 or the spring of ’46 because as we veterans swarmed over the campus after WWII, Stimson became a male dorm by 1947. Katie would have been a freshman from Sunnyside and later my beloved wife. She graduated in ’49 after living mainly in Community Hall.

After a semester or two in South House, I became a Stimson resident—and proud to have been its president my senior year. That was great, but Don Bond ’51, now a retired Bellevue lawyer, was elected vice president of our senior class and two other Stimson friends were chosen student body presidents. They were and are Bill Green ’51, who lives in Honolulu, and Pullman resident Dave Nordquist ’52, also a long-time WSU faculty member.

Katie died five years ago and I understand that Minerva suffered destruction by vandals—but with hopes of having a replacement.

Unexpected tragedy can strike at any time, as our family experienced in 2005 when our oldest son Matthew took his own life. He was an athlete, a sergeant in the United States Marine Corps, and a Chelan County sheriff’s deputy. But even the training and discipline from those vocations could not save him from death by his own hand at age 27, a result of a failed relationship.

Seven years after his death I wrote a book, Matt’s Last Call: Surviving Our Protectors, sharing our family’s journey of joys and sorrows. It was a story of hope and of new beginnings and the birth of a passion to reach out to others before it is too late, and to comfort those who are survivors of a suicide. Woven throughout my book are the seeds of a deep Christian faith that sustain our family, including reflections from Matt’s father.

There is an obvious need for training in suicide prevention. For all first responders, training should be required and continual. Currently, it is sporadic at best or missing altogether. The stigma of suicide and the “hush-hush” nature that surrounds it is the main culprit. Breaking through the stigma is essential to get the issue out on the table.

If you are the survivor of someone close to you who has committed suicide, choose not to define the person by that final choice. They had a life. Remember them by talking about them to others, highlight their accomplishments, and do something special to honor them on their birthday and during the holidays. Keep a favorite picture of the person in your home. Speak of the good times you had together. Keep their memory alive.

Our Cougar family has experienced the loss of one of its sons, Tyler Hilinski, last January. Let’s do all we can to not only honor and stand with Tyler and his family, but train ourselves to watch out for the obvious signs and ask the tough questions to those we sense could be struggling. Even when there are no obvious signs, by getting up-close-and-personal we may uncover some dark corners. Become involved. Lives depend on it.

In the Summer 2018 article “Trout,” Kyle Smith was misidentified as Kyle Long.

The advertisement on page seven listed Nigeria as the first location for a new pasteurization thermometer developed by Victor Charoonsophonsak. The country is actually Tanzania.