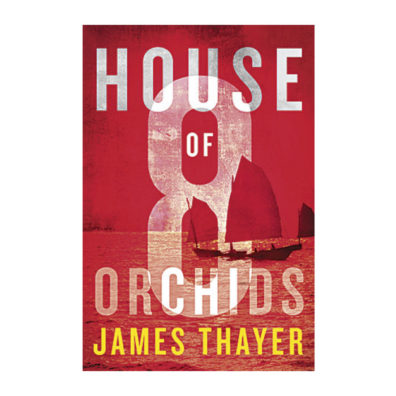 Fast forward to the 1930s. War with Japan is heating up. The boys, now men, have been raised in the eponymous House to serve its master, the eunuch Chang. John, bigger than his artistic brother, is a lightning-fast expert with his throwing knives. William’s talents are employed forging documents and scrolls, which are sold to fund the eunuch’s nefarious schemes.

John is intensely loyal to Chang until one day he has to decide between the eunuch and William. But simply leaving the employment of the House is not an option, so John must use his street smarts and fighting ability to try to rescue his brother and himself from the unforgiving eunuch.

Vividly rendered scenes follow hot on the heels of one another as Thayer runs his characters up and back the Yangtze River gorge, searching for William. Dark back-stories emerge and we realize just how much trouble John is in and how slim his chances of success really are. As the adventure cascades towards its climax we meet a feisty lady doctor from Idaho, and our heroes are rescued by a huge and terrifying dog called Big Moon.

Thayer’s lean prose makes for page-turning thrills, while knife-wielding John’s noir wit leavens the action with salty humor. For readers who haven’t yet discovered Thayer, this is a great place to start and his backlist of some dozen or so novels leaves plenty for those hungry for more. Thayer’s novels collectively cover a lot of often-neglected history and geography, so no two are the same but all are crafted with loving attention to detail and a dangerous sense of fun.