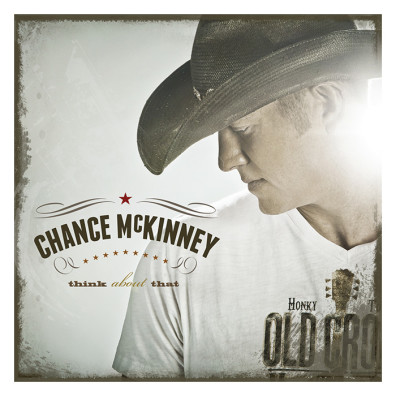 As the rhythmic guitars launch “Son of a Gun,” the lead song from Chance McKinney’s album Think About That, it’s easy to get hooked into his industrial country music, a powerful blend of modern country and guitar-driven rock, with some unexpected surprises along the way.

If you can expect anything from McKinney’s music, it’s a solid dose of fun. In the second track, the organ, catchy melody, and backup singers from “Good Life” would make a good addition to the iPod shuffle for a summer barbeque. Mix it in with the goofy amusement of “Hillbilly Rich” and the anthem to an intoxicating woman in “She’s My Whiskey,” and you’ve got a heady bunch of tunes for a road trip, a workout, or a party.

One of my favorite tracks on Think About That is “When I Think About You,” a song that resonates with all of us who get easily distracted by the million and one things to ponder in our lives. How can anyone resist a song that name-checks Johnny Cash, Def Leppard, and Chris Farley?

The fun-loving, good-time songs are balanced with some thoughtful ballads with true emotional resonance. The title track, for example, tells of some guys talking their friend out of a disastrous choice. A standout song on the album is “Some Bridges Don’t Burn,” where the hard lessons of relationships come home to the narrator.

Even though I enjoy those tunes, I have a confession: I’m a real sucker for breakup songs—think, “These Boots are Made for Walkin’” and “4th Time Around.” So I was pleased I could add a new song to the bitterness playlist with the tale of a gold-digger ex as she gets her comeuppance in “How’s That Workin’ For Ya?”

Chance McKinney has been touring for a while now and has really honed his musicianship, his lyrical stories, and his ability to engage a listener. Listen up and, like the opening track says, lift your hands and get ready to move.