If you’re looking for Gary Chastagner around this time of year, you would do well to put out an all-points bulletin to Wherever Christmas Trees Are Sold. He’s perused trees up and down the West Coast, as well as in Massachusetts, Rhode Island, Wisconsin, Illinois, Michigan, Arizona, and Texas. Just look for the cheerful fellow taking clippings, bending needles, and chatting up the owners about things like moisture content and needle retention.

“My family knows that if it’s Christmas time, I’m usually around looking at Christmas tree lots,” he says.

Chastagner, officially a plant pathologist with the WSU Puyallup Research and Extension Center, is better known as “Mr. Christmas Tree.” For more than 30 years, his pursuit of new knowledge about the trees has been so thorough that it would be called obsessive, were it not science. He has studied tree diseases, analyzed species from around the world, deconstructed tree stands, and grappled with that bane of the Christmas tree consumer, needles on the carpet.

Now he is helping lead the largest Christmas tree research project in U.S. history, a $1.3 million effort bringing genetic analysis to bear on a devastating root disease and that pesky needle problem.

Other researchers may be better versed in growing trees, says Chastagner, but he and his colleagues are pretty much the international authorities on what happens to a tree after it’s cut.

If this strikes you as a quirky scientific niche of little social impact, keep in mind that Christmas trees are a $1 billion industry, with some 15,000 farms employing 100,000 full- and part-time workers. One-third of the nation’s trees come out of the Pacific Northwest.

Production numbers are largely unchanged over the past century, but sales are in decline as the trees face growing competition from artificial trees and dissent from people who vacuum.

Over the decades, Chastagner has consistently been looking out for growers, “trying to figure out a better mousetrap, so to speak,” says Ed Hedlund ’75 Forestry, who has operated a tree farm in Elma since around the time Chastagner started his tree research. He’s provided two official White House Trees, to the Clintons in 1999 and the Bushes in 2002.

“The industry has been around a long time, but a lot of it was natural, Douglas fir from clearcuts,” he says. With the rise of Christmas tree farms, tree growing “became a whole different animal as far as diseases and the culture techniques. It got to be a lot different from what Christmas trees were back in the ’40s. Gary has been good as far as when something new comes up, and there’s always something new.”

Chastagner became a Christmas tree researcher by accident after arriving at WSU in 1978 to study ornamental bulb crops and turfgrass diseases. The state legislature issued a mandate for WSU to study Swiss needle cast, a fungal disease attacking Douglas firs, and an administrator visited from Pullman to offer $30,000 in funds.

“There was no one doing disease work on Christmas trees at the time,” Chastagner says, “and I was sort of the new kid on the block.”

He took on the task and found the disease could be controlled with a single fungicide application. At the same time, Chastagner wondered what the infection was doing to the trees post harvest. He put trees in two vacant rooms at Puyallup, simulating conditions in a home, and sent trees to California for similar tests.

He found infected but otherwise healthy looking trees were drying out twice as fast as other trees and losing significantly more needles while on display. Two trees in particular shed most of their needles in California. Checking his notes, Chastagner saw both were drier than any of the other trees before they were displayed.

This set him on an odyssey of measuring moisture levels in trees shipped to points down the West Coast.

There, he says, a large percentage of the trees on retail lots had already dried below the moisture threshold that damaged them.

You can probably guess that the warmer, drying climate of southern California was causing the trees to dry out faster. Chastagner also saw trees being displayed on wooden stands with no overhead spraying, causing them to dry out further.

He set up a simulated Christmas tree lot in Tempe, Arizona, one of the driest cities in America. He displayed some trees dry, some with their bases in water, some with a sprinkler wetting the foliage at night, and a set with both water and irrigation. The dry trees didn’t fare well, but even a sprinkled tree held up. As a result, many retailers in southern California and the southwest now use some system to keep their trees hydrated.

He went on to test how different varieties of trees react to drying. Some, even if displayed in water, last only three weeks or so. But a watered noble fir can last eight weeks, while Nordmann and Turkish firs in one test lasted three months.

Through repeated experiments, Chastagner has found that whatever the variety, and regardless of whether the tree is from a U-cut farm or gas station lot, the single best preservative for a Christmas tree is water.

And lots of it. Each day, a tree needs a minimum of one quart of water per inch of diameter at the base. Of 30 tree stands Chastagner tested, roughly one in four fail to hold enough water for even the smallest tree they could otherwise accommodate. Only two could provide enough water for all the tree sizes they could hold.

“One time I did a story with the Wall Street Journal on Christmas tree stands,” says Chastagner, who has also appeared in the New York Times, the Los Angeles Times, and on National Public Radio. “Their conclusion was, someone who invents the perfect Christmas tree stand is going to have a corner on the market.”

Chastagner is now in the midst of his most industrious work yet, a USDA-funded project to identify just what properties consumers want in a Christmas tree and the genetic traits behind them. The effort has the backing of eight state and regional Christmas tree associations, as well as the National Christmas Tree Association and Weyerhaeuser, which grows seedlings for tree farms. Jeff Joireman, an associate professor of marketing in the College of Business, is working with the national association and will conduct a consumer survey. Researchers in North Carolina, California, Pennsylvania, and Michigan will help with other aspects.

The research team plans to identify genetic markers of firs with desired properties, as well as resistance to Phytophthora root rot, a major scourge, and use the genetic information to screen trees for the most promising sources of seed.

Technically, Chastagner could retire. But the trees keep calling him.

“Research leads to additional research,” he says. Especially, “When you’re curious about things—why is this happening and how can we modify this so it doesn’t happen?” 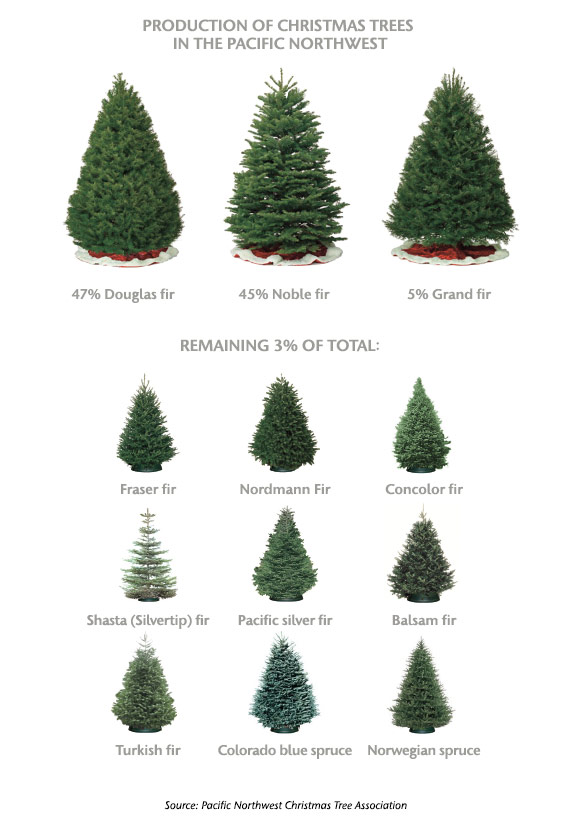