In March, alumni and team members of men’s crew, the oldest sport club at WSU, gathered for Cougar Crew Days, as they do each year. But this year’s celebration had special significance: 40 years of rowing competitions.

Rich Stager ’74 and Ken Abbey, vice president of business affairs, formed the crew team in 1969, built the Cougar Shell House on the Snake River, and appointed landscape architecture professor Ken Struckmeyer as the first coach. The team entered competition in 1973.

The Cougar Crew Days included a banquet, auction, and the annual race between team members and alumni. According to Doug Engle ’80, they raised more than $36,000 for the team over the weekend.

The WSU women’s rugby squad won their second national championship in the last four years, beating Winona State 60–5 in May. The team, undefeated this season, has competed in the Division II nationals for the last five years. Next year, the club sport will move to Division I, with stronger competition for the Cougs. 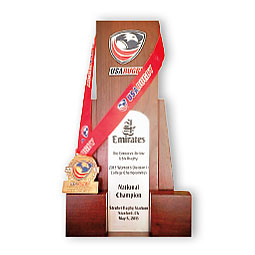